On May 14, 2019, long-time Village Trustee James (Jim) Petri was honored with a plaque on the Village’s Rotunda of Recognition with sincere gratitude and appreciation of his dedicated service to the Village of Elk Grove. Mayor Craig B. Johnson and the Board of Trustees were joined by Petri’s family and friends in recognizing his 40 plus years of devoted service and paid tribute to his accomplishments. 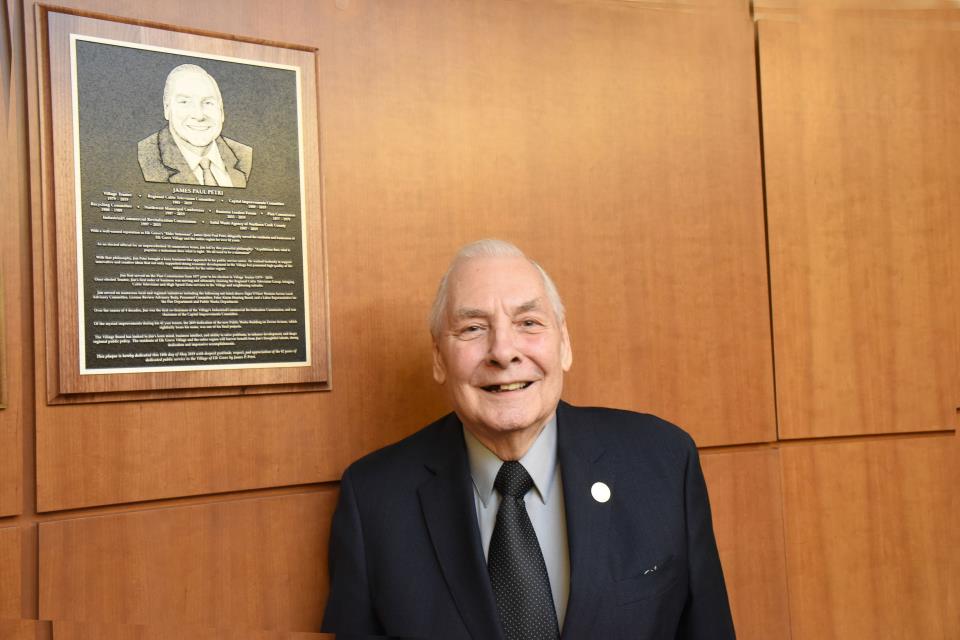 “It was an honor and privilege to serve with Trustee Petri. His keen mind, business intellect, and ability to solve problems and shape public policy will be missed. The residents of Elk Grove Village, and the entire region will forever benefit from Jim’s strong dedication and impressive accomplishments.” said Mayor Craig Johnson.

At the Village Board Meeting later that evening, Trustee Petri’s colleagues on the Board shared their memories and personal appreciation for his service to the community.  Trustee Petri was presented with proclamations honoring his contributions on behalf of the Solid Waste Agency of Northern Cook County, the Northwest Municipal Conference, and the Elk Grove Village Italian Sister Cities. Trustee Petri was honored with a standing ovation after giving his final remarks.

James Paul Petri was elected in 1979, where for over 40 years he served on fourteen boards, commissions and committees, attended over 800 Village Board Meetings and adopted 2,307 ordinances all while serving with 3 Mayors, 18 Village Trustees, 3 Village Managers, and 5 Village Clerks.

Of the many improvements that Petri saw take place in Elk Grove over 40 years, Petri lists the following as high on his list:

“In everyone’s life, the time comes to make a change and that time has come for me.  It is with heartfelt gratitude that I thank the citizens of Elk Grove for trusting me to serve them over the past four decades.  I am deeply touched and personally honored by the overwhelming support that you have all shown to me over the years.  I am certainly proud of my 42 years of public service to our outstanding community, my adopted hometown, Elk Grove Village.

“The good news is that I will remain as a good friend and neighbor here in Elk Grove Village.  The only difference is that I will now be able to spend my retirement years with my loving wife Patti, my children, and my grandchildren.

“In closing, thank you for the opportunity to serve you all.  It has been a wonderful experience and I couldn’t have done it without you.”