*Please note that the videos on this page were made before the Coronavirus Pandemic, and the program is currently voluntary and not mandatory.

On May 1st, the Village's Water Meter Upgrade Program was restarted. At this time, scheduling an appointment to upgrade your water meter is voluntary. During the appointment, a plumber will need to enter your home to upgrade your water meter. The plumbers are screened each day, will be maintaining social distancing, and be wearing proper personal protective equipment. Residents can schedule an appointment by calling 866-931-2199 or going online at www.ScheduleMyMeter.com.

Elk Grove Village is embarking on a program that will replace about 10,600 manual read water meters with new radio read meters.  The modern meters will replace older, mechanical units with new technology that will help identify high water usage and potential leaks.  The new meters will result in smarter water use for customers, and enhanced water conservation opportunities. The new meters and remote will automatically transmit data wirelessly and eliminate the need for Village staff to manually read each meter.  This allows the Village to operate more efficiently and reduce costs by preventing recording errors and eliminating time-consuming manual meter reading.

When will the Village begin installing new meters?

Installation will begin in early 2020 (Late January/Early February 2020).  The installations will be staggered throughout the community over several months.  The Village will provide further communications in the coming months regarding scheduling appointments for your new meter.

Why is Elk Grove Village installing and modernizing water meters?

Water meters across the Village have approached the American Water Works Association’s recommended lifecycle.  As the current mechanical water meters age, they may slow down and their accuracy in registering water consumption decreases.   The planned water meter modernization will replace all water meters in the Village to achieve both technological and customer service benefits.

As an additional benefit, the new meters can provide leak alerts, allowing customers to avoid possibly extensive water charges due to their leaking plumbing, faucets, or toilet fixtures.

Who will be installing the new water meter?

The Village has awarded a contract to Siemens Industry, Inc. to perform this meter upgrade. The installer will need to access your home to replace the meter.  Siemens will reach out and work with residents and businesses to arrange a convenient appointment time to complete this task.

Do you have to enter my home/business to change my water meter?

Yes. Due to freezing temperatures in the winter, all meters are installed within the home or business. Most homes have a device for remote reading access on the outside of the home that will also be changed as part of this project.

Will my water bill increase with the new water meter?

The water rate you pay will not change as part of this project—the rate charged for water is the same, regardless of the type of water meter being used. As always, your bill can increase or decrease depending on how much water you actually use.

What will be different about my water bill with the new meter?

To illustrate this change, we have provided an example in the image below (Please note we’ve used round numbers to simplify this explanation, your actual bill will show consumption down to the individual gallon). 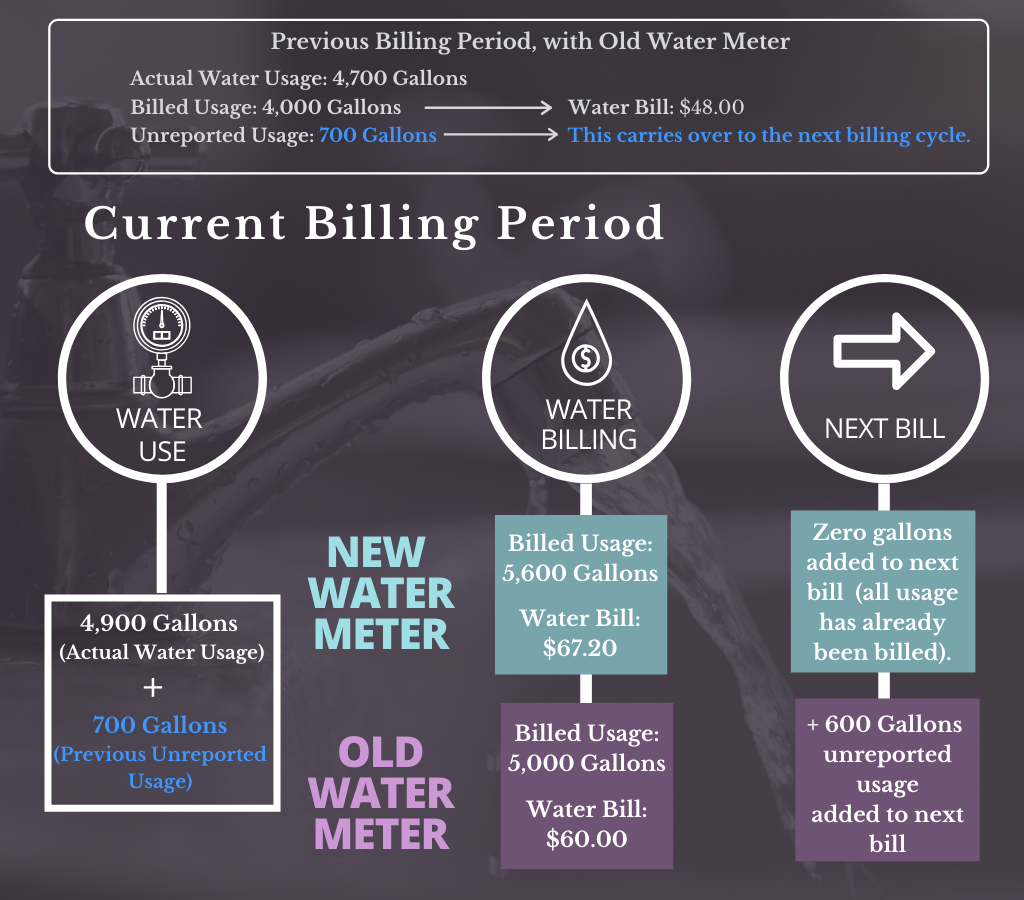 I just received my first water bill after getting a new meter installed, and my water consumption looks a little higher than usual. Why is this?

On your first digitally read water bill, you may notice a slight bump in the reported water consumption, because in addition to being billed for actual usage for the first billing cycle, you will also be billed for any unreported consumption from the prior billing period.

The maximum impact from unreported consumption would be 999 gallons, or $11.99, and this will only affect the first water bill using your new meter.  Aside from this one-time impact, moving forward your water bill will reflect the actual amount used during the billing period.

Who can I talk to with questions about my water billing?

For further assistance specific to your water bill, Utility Billing staff is available to answer questions by calling 847-357-4060.

Are there health risks associated with the new meter's radio frequencies?

According to the FDA and the World Health Organization (WHO), among other organizations, to date, the weight of scientific evidence has not effectively linked exposure to radio frequency energy from mobile devices with any known health problems.