Do You Have Cottony Maple Scale?

Sticky Substance
Have you noticed a sticky substance on your cars, trees, homes and other areas of your property this summer? This sticky substance is caused by cottony maple scale.  Cottony maple scale is primarily found on silver maples and boxelders but can also be found on other maples, white ash, hackberry, dogwood, beech, apple, oak, linden, elm, black and honey locust. 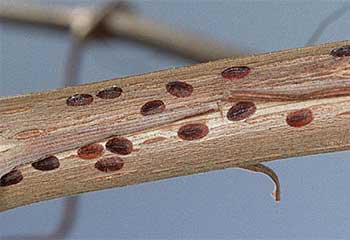 What is it?
Cottony maple scale is one of the largest and most conspicuous soft scale insects that attack ornamental plants. The overwintering form of the cottony maple scale is a small, brown, flattened 1/8 inch long scale attached to the bark of twigs and small branches. During the summer, the scale enlarges by secreting wax resulting in a body several times greater than the overwintering form. The immature scale is flat, oval shaped, and light yellow to green. Is that popcorn in your tree?
Females produce white, cottony egg sacs that resemble pieces of popcorn on twigs. These scales also produce large amounts of liquid waste (honeydew) so leaves and anything else beneath the tree may be shiny and sticky.

Why am I just now noticing the sticky substance?
Cottony maple scale is always present.  However, in some years, the scale population increases above “normal” and becomes large enough to get noticed. Due to a long wet spring immediately followed by a hot dry summer the scale has become more pronounced this year.  The dry weather has also caused the substance to become airborne and travel greater distances from the trees it originated from.

Why is the substance sometimes grainy and discolored?
Sometimes mold grows on the honeydew, which gives it a sooty appearance. Additionally, dust and other airborne particles will become stuck to the honeydew and make it appear discolored.

For more information on the Cottony Maple Scale please visit the following websites: