In 2015, the Suburban O’Hare Commission (SOC) engaged JDA Aviation Technology Solutions (JDA) – led by Joseph Del Balzo, the former Acting Administrator of the FAA – to conduct a study of a number of technical issues relating to community concerns over noise generated by operations at O’Hare International Airport (ORD).

The mission of SOC's expert team was to work collaboratively with the Chicago Department of Aviation to develop professional recommendations-–recommendations that can be implemented to reduce noise and fairly disburse aircraft across the entire region, but not impact O’Hare operations nor impede aircraft safety.

SOC experts have successfully developed these professional recommendations and we look forward to presenting these to the CDA. We also look forward to seeing many of these items explored and implemented to mitigate aircraft noise. Together, O’Hare and its neighbors can coexist to the mutual benefit of the entire region.

The experts’ findings include the following:

The map below compares the projected 65 DNL Noise Contours for Full OMP Implementation (what the experts hope is the worst case scenario) versus today’s ORD Condition (Using May 2014- April 2015 Fleet Mix Data). 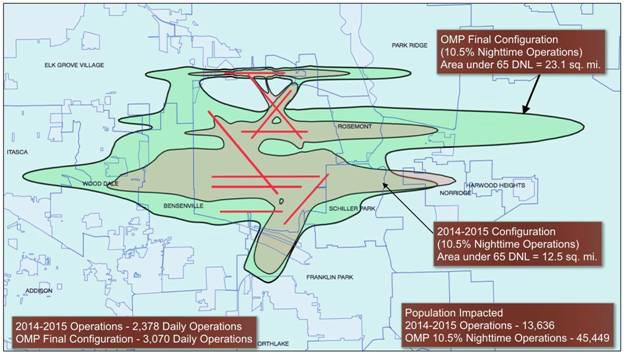 The JDA Team has done a wonderful job of identifying realistic methods of reducing aircraft noise. We understand that we live next to the airport, we benefit from the airport, and that aircraft noise is going to exist. We also understand that 20 recommendations is a considerable amount to provide at one time to the CDA. However, by working together, our hope is that we can have O’Hare Airport be a good neighbor and provide noise relief to the region.

SOC stands ready to participate with all stakeholders in a constructive dialog which will hopefully implement the recommendations of the JDA expert team as well as other potential remedies for the O’Hare noise problem.

The 20 JDA identified methods to reduce aircraft noise include:

JDA FQ-1: The CDA should develop a more comprehensive, aggressive Fly Quiet program, with a strong mission statement demonstrating its commitment to the highest level of resources to establish and maintain the quietest environment practical for all nearby communities.

JDA FQ-2: The CDA should leave a third runway open during Fly Quiet hours, including at least one diagonal runway, to disperse airport noise effects and to reduce flying distances over communities.

JDA FQ-5: A Continuous Descent Approach should be developed by the FAA for each arrival runway and used during Fly Quiet hours.

JDA FQ-6: The CDA should conduct a review of Noise Abatement Departure Procedures (NADPs), revise as appropriate, coordinate with users and advertise the NADP policy within the Fly Quiet Program Manual.

JDA FQ-7: The SOC, CDA and FAA coordinate to assess departure flight paths from ORD’s newest runways and preferred runway usage, to determine the best runway configurations and departure headings for noise abatement and include these within the Fly Quiet Program Manual.

JDA FQ-8: All of the current recommended departure headings should be assessed to determine whether they are actually achieving the goal of directing flights over less-populated areas and revised as required to minimize population impacted by noise on a rotating basis every evening. The CDA should consider a computer driven model to best determine how to distribute flights over the region on an objective basis to minimize the impact on any particular community. Operations should be evenly disbursed over the entire population.

JDA FQ-9: Enact a mechanism to facilitate the periodic review of the Fly Quiet Program Manual, to ensure that it is up-to-date and continues to reflect changes to the airfield and surrounding communities.

JDA FQ-10: The FAA should reevaluate RNAV arrival and departure procedures to determine whether amendments or new procedures could be designed and implemented to provide additional noise benefits.

JDA FQ-11: The areas in which over flights create the least disturbance should be specifically identified by the SOC and nearby communities by correlating noise complaint numbers with population density and flight track analysis. The SOC, CDA and FAA should then collaborate and review whether higher altitudes for initial turns, compound procedures or extended distances on initial headings will reduce noise impacts during Fly Quiet hours.

JDA FQ-12: Throughout each day, during light traffic periods, or during weather events where departures are restricted to a single heading, controllers should use the published Fly Quiet noise headings as “default” departure headings, even outside of normal Fly Quiet hours.

JDA FQ-13: The CDA should continue advocating the use of minimal reverse thrust and for pilots to avoid use of early runway exits during Fly Quiet hours, unless operationally necessary.

JDA FQ-14: The CDA should encourage airlines to avoid using old generation aircraft such as the MD80 and DC10 during Fly Quiet hours.

JDA FQ-15: The CDA should coordinate with other major airport operators to encourage airlines using A320 aircraft to retrofit their fleets with vortex generator modifications for reducing airframe noise.

JDA FQ-16: The CDA should enhance the report card program to measure and publicly report on airlines and cargo operator’s noise mitigation performance metrics and the CDA, FAA and airlines collaborate to minimize scheduled operations during Fly Quiet hours.

JDA FQ-18: The CDA should implement a Runway Rotation Plan to avoid concentrating flights over the same communities and equitably distribute noise during the Fly Quiet hours.

The entire report from JDA is available on the JDA website: http://oharenoiseproject.com/.